Click here for a 3 minute video of the entire build. 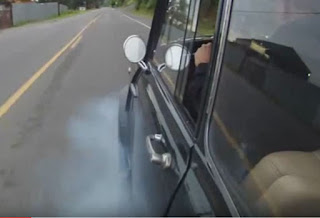 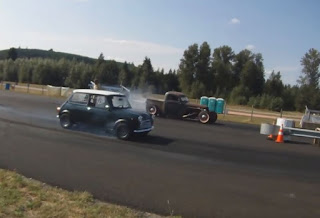 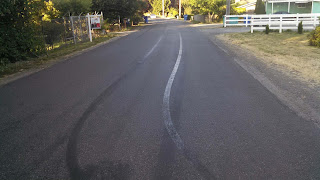 The VTEC Mini has been leaving it’s mark in the world.
This summer has been one of the best on record for the Seattle area.  Tons of sun and several records set for warm dry days.  Although, I will admit some days were a bit to warm to jump in the Monster Mini.  With the big engine STUFFED under the hood, there is quite a bit of heat produced and it all seems to find it’s way in the cab.  I have sealed up and insulated about as good as I can so I’ll just need to live with it.  I took a friend from work for a ride and hit a few on-ramps and back roads, loving this car.
The photo is from leaving a friends’ house and giving them a show.  That was a second gear clutch dump and the way the road is surfaced, things lit up nice.
The car has been running great all summer other than a broken bracket in Canada and then… I jump in it the other morning, fire it up and back out the garage.  I plant the break and the peddle went to the floor.  New adventure!  I’ll be diagnosing the problem hopefully this weekend.
Posted by Todd at 12:49 PM No comments:

Click here for a 3 minute video of the entire build.


Well it’s been awhile since I’ve posted here so I figure an update is due.  I have been enjoying the mini with the VTEC installed and humming along.  I drove it with a friend half way across the state and over a few mountain passes in September of 2014, other than that I’ve been just buzzing around locally.  I have been getting 35-40 miles per gallon and those are some hard pushed miles too.  I figure if I’m easy on the loud peddle it would be around 45 mpg.

Every year several hundred classic minis from all over the country will gather and have a week of fun at “Mini Meet West”  .  I’m looking forward to the autocross as you can imagine and this year the meet is up in Canada.  Fortunately for me, I live near Seattle so the trip will be only a few hours.  I’d rather be lucky than good!  I wonder how many Honda Civic powered minis there will be this year.

As for the car, I have a few things I want to do to it.  The drive belt which powers the alternator is rubbing ever so slightly on a bracket and is wearing out.  I’ll try to clearance the bracket just a touch.  I just pumped up the hydro suspension about half an inch to gain some clearance in the front.  I was rubbing tires a little when turning sharply.  I used the same water in a tube method to pump up the car that I did before.  You can see the pump I made out of pipe on the blog page titled “Hydrolastic Suspension Pump”  (December 2012).  I plan on installing a stereo and maybe take it to a dyno (or rolling road as you English call it).


I took the mini last summer to a 1/8 mile drag strip with some friends in their cars.  We were quite the crew going down the road with an old Chevy Nova on drag slicks, a rat-rod pickup and my Italian Mini.  We had a blast racing, learning the starting lights and watching some 1000 hp V8 powered cars thunder down the track.  The amount of $$ some of these people have stuck under their hood is just staggering.

On a side note, I was able to enjoy a 2013 Lamborghini Gallardo for a day and of course I needed to get a few pictures of that in the garage next to my mini.  The Lambo was crazy quick with a 0-60 mph time of just over 3 seconds.  That is the only car I’ve driven that can out accelerate my VTEC mini.  What a ride!